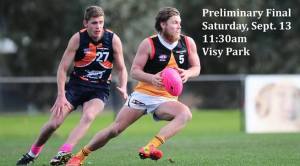 Twelve months may have lapsed, but it has not been forgotten who knocked the Calder Cannons out of the 2013 finals.

While many of the players are different and the Dandenong Stingrays coach has changed from Graeme Yeats to Craig Black, this weekend Andrew Jago and his Calder side will be aiming to defeat the team that bundled them out of the finals last year and progress to the 2014 TAC Cup Grand Final.

“It’s a huge challenge, Dandenong removed us from last year’s finals series, and no doubt they will be trying fairly hard to do it again,” Jago said.

The two teams have only met once since that Preliminary final game, in Round 12 this season which saw a 29-point victory to Calder.

However they met during the NAB AFL U18 Championships, with both teams missing key players who were on Vic Metro and Country duties.

Calder has just one injury concern entering the game, with Ben Allan needing to prove his fitness prior to the Preliminary Final clash Saturday, while Dandenong will need to try and make the tough decisions with a fully fit list to pick from.

Both sides boast exciting goal kicking abilities, with Calder’s competition leading goal kicker Jayden Foster in blistering form to end the season, coming off six goals in the Qualifying Final and having kicked 45 goals so far.

Another key for the Cannons will be Peter Wright. Despite the key position forward /ruck seemingly having a quiet game with no goals against North Ballarat a fortnight ago, Jago believes he played his role and will do so again this weekend.

“I think Pete had a big influence on the game, we played him up the ground a bit higher, and he was the one that pushed the ball inside (50) an awful lot.

“Foster got on the end of a few, Josh Cauchi and Hisham Kerbatieh and Cal Moore certainly benefitted for Wrighty having at times two or three running up the ground and Cal being able to go up the middle relatively unguarded.”

Up forward for Dandenong, Jack Lonie put on a clinic with five goals in last week’s Semi Final match.

Stingrays Talent Manager Mark Wheeler said it was great to see Lonie influence the scoreboard last weekend with the form that saw him selected in the TAC Cup Team of the Year.

“It was really good for him … his GPS data was at elite level.

“He played his role - we know he is a small forward, and we are playing him to his position, but he covered about 14km in his GPS data.”

Wheeler is aware his team has had a good run in the finals, with both of their finals opponents dealt injury blows during games. His side however is starting follow the messages coach Craig Black has been driving the whole way through the season.

“Belief is a funny thing though, and I think this group has belief and it is a very tight group and is all now falling in sync.”