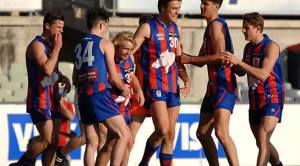 The Calder Cannons and Oakleigh Chargers marched into the TAC Cup Grand Final with both sides posting emphatic Preliminary Final victories over the Dandenong Stingrays and Sandringham Dragons respectively.

The Stingrays proved no match for an impressive Cannons’ outfit in the early match, succumbing by 53-points.

The Cannons’ aerial dominance proved too much for the Stingrays with the pre-game favourites extending their lead at every break to prevail 15.12 (103) to 7.7 (49)

While the Cannons’ abundance of key talls proved critical it was livewire Josh Cauchi that benefited most, nailing four goals to prove why he is one of the most dangerous smalls in the competition.

Damien Cavka contributed three of his own, with Jayden Foster Hisham Kerbatieh and Zak Wunhym also finishing with two apiece.

Further up the field and it was Jack James, Nick O’Kearney and Matthew Goodyear that were the standouts, handling the pressure of the big final with ease.

Clever forward Jack Lonie led the Stingrays’ charge with three goals, while Mitchell White and Kyle Gray did their reputations no harm with four-quarter performances.

Keen to press their own claims on premiership favouritism, the Chargers wrestled control of their clash with the Dragons after quarter time to run away with a 74-point triumph.

Just seven points separated the teams at the first break but a six-goal-to-zero second term from the Chargers put the game beyond doubt.

Key forward and likely Collingwood father-son recruit Darcy Moore showed glimpses of why the Pies faithful have reason to smile with three goals and taking one of the best marks ever seen in the TAC Cup.

But best-afield was Alex Urban who ran riot through the midfield and also hit the scoreboard with two majors.

Kade Answerth and Marc Pittonet also shone for the winners and loom as key men when the Chargers meet the Cannons today.