Just who mastered the beep test? 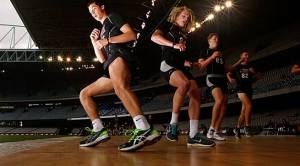 It is the test that pushes all participants to their limits, so who performed well in the dreaded beep test at Combine?

The beep test ended day 3, with the endurance of each of the players put under the microscope.

Former Dandenong Stingray now Hawthorn player Billy Hartung’s record last year of 16.6 was not challenged, with 16.1 the best time recorded. The honour was shared between South Australian pocket rocket Caleb Daniel, who impressed in the NAB AFL U18 Championships earlier this year at 167cm tall, and NSW midfielder Jack Hiscox.

Brenton Payne set the early mark for the Tall Forwards group with a time of 13.5, but this was quickly eclipsed by Dandenong Stingray Tom Lamb with a 15.5 which would eventually be the fourth best time overall, and second best time by a TAC Cup player at Combine.

Best time went to Nathan Drummond from the Murray Bushrangers with a 15.9, continuing his strong performances at the Combine this year.

Other players to feature in the best times were Sandringham Dragon Ed Langdon with a time of 15.3, with Jason Castagna (Northern Knights) 15.2, Jordan Cunico (Gippsland Power) 14.12 and Christian Petracca (Eastern Ranges) 14.12 rounding out the top 10.

Earlier in the day footballs worked their way into the schedule in between all the physical testing, with the handball/clean hands, kicking assessment and goal kicking opening the proceedings on the Thursday. Accuracy, response and listening to instructions were all tested, as the participants all enjoyed getting their hands on the footballs for the first time at Combine.

Drummond (Murray Bushrangers) continued his impressive figures featuring in the top 5 for all three assessments, with 27/30 for the kicking test , 26/30 in the clean hands (the equal best score with four others including Northern Knight Reece McKenzie and Murray teammate Dougal Howard) and 25/30 in the goal kicking.

The final day at the Combine will see the running abilities tested once again with the 3km time trial.