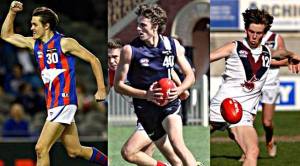 Draft day came early for three TAC Cup players with their AFL dreams confirmed with selection under the father/son rules.

Darcy Moore (Oakleigh Chargers/Collingwood), Zaine Cordy (Geelong Falcons/Western Bulldogs) and Josh Clayton (Sandringham Dragons/Brisbane) all successfully reached the clubs that their fathers played for after the father/son and Academy bidding was completed at Etihad Stadium this morning.

Darcy Moore ended over 12 months of speculation whether Collingwood - the club his Brownlow Medal winning father Peter played 172 games for - would meet any rival bids for his services, when they matched the Western Bulldogs first round selection five with their own first round selction of pick eight.

Zaine Cordy became the fifth current father son selection with the Western Bulldogs, as the Dogs matched Fremantle’s Round three selection of pick 52 with their fourth round selection pick 62 to secure the son of 124 game Footscray player Brian.

With no bids received by rival clubs for Josh Clayton, his path to Brisbane Lions was made easy as they will use their last selection in the draft to recruit the son of former Fitzroy 160 game player Scott to the club next year.