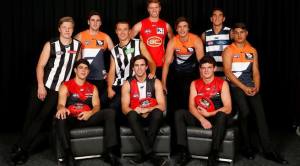 AFL Victoria's TAC Cup competition was on show as the top 10 selections in the NAB AFL Draft were announced.

For the third time in four years eight TAC Cup players had the honour of being apart of the top 10, and it was a hattrick of top three selections for the competition.

While the top three picks of Patrick McCartin, Christian Petracca and Angus Brayshaw had been predicted for many months, interest turned to the other players that would make up the top 10 in 2014.

Let's take a look at the top 10 picks from the TAC Cup:

Patrick McCartin was the player that moved to the top of Phantom Drafts over the last few days and it was warranted asSt Kilda will bolster its forwardline with the key position Falcon. A strong mark on the lead and an accurate kick for goal saw McCartin ranked as the best forward prospect in the Draft. Despite only five TAC Cup games this season and three Championship matches for Vic Country due to injury, the signs were still obvious of his potential as he averaged eight marks a game in the TAC Cup and gained All Australian selection at the U18 Championships.

DRAFT FACT: McCartin is the first Geelong Falcon taken at pick 1 since Luke Hodge back in 2001.

Christian Petracca put his hand up for a high draft selection winning the Larke Medal as best player for the NAB AFL U18 Championships earlier in the year, having averaged 25 disposals a game both at the Championships and during the home and away season. His move into the midfield this season has added another dimension to his game, with his ability to break tackles and accurate kicking the key to his game. Won the Vic Metro MVP and was in the TAC Cup team of the Year.

DRAFT FACT: Petracca is the first Eastern Ranges player to be selected at pick 2.

The medium midfielder distributes the ball very effectively by either hand and on both feet. Averaged 22 disposals, five Inside 50s and four tackles during the NAB AFL Under-18 Championships and averaged 23 disposals a game during the TAC Cup season. A TAC Cup team of the year and All Australian selection.

DRAFT FACT: The last Sandringham Dragons player to be drafted at pick 3 was Chris Judd, selected by West Coast in 2001.

Highly competitive and versatile medium defender/midfielder who is both strong overhead and in one-on-one contests. Good decision-maker by hand and foot. Had a terrific NAB AFL Under-18 Championships taking his game to the next level where he averaged 15 disposals (nine contested) in five matches.

DRAFT FACT: Luke Power is the only other Oakleigh Charger draftee to be selected at pick 5 in the draft – he went to Brisbane in 1997.

Very competitive tall defender with excellent mobility and repeat efforts. Anticipates well in coming off his man to support his defence and is strong overhead. Can also push forward and provide a marking target for his team. Averaged 14 disposals, four marks and three tackles on his way to All-Australian Under-18 honours at the NAB AFL Under-18 Championships.

Smooth moving midfielder with excellent balance and running capacity. Has an innate ability to make the difficult look easy, is dangerous when he pushes forward and can kick long goals on the run. Has an excellent mix of speed and endurance and can play inside or outside. Selected in Under-18 All-Australian team and TAC Cup Team of the year.

DRAFT FACT: Ahern was one of nine Indigenous players selected in the draft, joined by Nakia Cockatoo from NT in the top 10.

Ruckman/tall forward who is a long, accurate shot for goal and sound overhead mark. Mobile player whose ruckwork is impressive, using his height to advantage. Very good below his knees and has great running capacity. Won All-Australian Under-18 honours and TAC Cup Team of the Year selection.

DRAFT FACT: Wright joins Jude Bolton as the only Calder Cannons players taken at pick 8 in the draft – Bolton was drafted to Sydney in 1998.

Tall forward or defender with excellent closing speed and natural leap. Strong overhead mark and smart around goals. Averaged 9 disposals and three marks in roles both forward and back during the NAB AFL Under- 18 Championships. Son of Dual Brownlow Medallist Peter Moore selected Father-Son by Collingwood.

See highlights of all the top 10 TAC Cup selections: