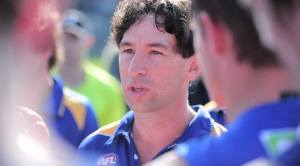 A unique new coaching structure will be unveiled at the Western Jets for 2015 and beyond in AFL Victoria’s TAC Cup competition.

In a partner between AFL Victoria and the Maribyrnong Sports Academy, the new full time coaching role will oversee the AFL talented player development pathway within the Sports Academy and the Western metropolitan region.

Western Jets 2014 coach Torin Baker will move into the full time role next season, selected from a long list of applicants for the new position.

“AFL Victoria is excited about this new position and sees this as a further reinforcement of the tremendous working partnership with Maribyrnong Sports Academy which started three years ago.

“AFL Victoria sees the philosophy of the student athlete which Maribyrnong espouses as a perfect fit for the organisation, hence the association,” Grbac said.

“The Sports Academy will be recognised as a provider and supporter of the AFL Victoria Talent Pathway and this association will provide possible scope for future school relationships, such as this one, in other regions in the Melbourne metropolitan area.”

The new role will provide a great development opportunity for Baker, able to work with talented players from other regions and hone his coaching skills outside the TAC Cup competition.

Baker is looking forward to the full time role with the addition of overseeing the Academy at Maribyrnong College.

“It's a great initiative for football in the region and I am excited to continue my coaching in this new role."

Players involved in the Academy will benefit from greater contact hours and access to a coach within the school environment. Past students at the school include North Melbourne’s Kayne Turner, Calder Cannons’ Peter Wright and Ben Allan and Western Jet Dillion Viojo-Rainbow.

Maribyrnong Sports Academy Director Rob Carroll said he is looking forward to further developing the football program at the school with Baker on board.

“We are excited about the dual appointment of Torin Baker to the Academy and the Western Jets and look forward to him working with our existing coaching panel to enhance the development of talented AFL juniors from the western and northern regions of Melbourne.

“His appointment to the Academy will give him unprecedented access to players during the school day for individual and specific coaching, analysis of game vision and decision making and we see this input enhancing the potential for players to be drafted to the AFL.”