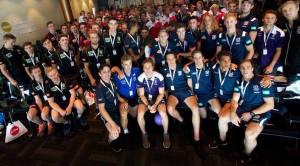 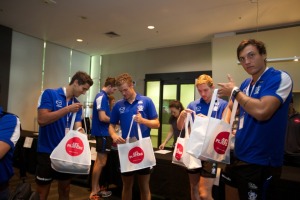 The latest crop of AFL Victoria’s TAC Cup draftees have this week participated in a two day AFL Induction Camp at Etihad Stadium, learning all important skills for during and after their AFL careers.

While the new AFL recruits have been on the training track since December at their AFL clubs discovering the skills needed on the field, the 60 TAC Cup draftees were welcomed by the AFL Players’ Association and were briefed on a number of topics to help them at the elite level.

Former players including Lenny Hayes, David Rodan, Brett Johnson and Luke Ball spoke with the players during day one of the two day camp, discussing topics that included the importance of wellbeing, career development, financial education, personal brand, respectful relationships, illicit drugs and match fixing, anti-doping as well as an education session about the AFL Players’ charity, Ladder, which helps tackle the issue of youth homelessness.

Players’ Association President Luke Ball – a TAC Cup graduate himself from Sandringham Dragons - said the camp helped the new recruits learn about the programs and support their association offered.

“The PA has strong programs and services that assist players to maximise the opportunities that an AFL career provides.

“We want these players to take advantage of these opportunities as early as possible within their career.”

Day one of the Induction Camp also provided players with the opportunity to gain an insight into the AFL system from recently retired St Kilda star Lenny Hayes.

Hayes said players need to understand the importance of engaging in off field development and begin maximising their time in the game as soon as they enter the system, as their careers won’t always turn out how they had planned.

“Being here today takes you back to when you first got drafted – it’s such an exciting time.

“As these boys will find out – AFL football can be a bit of a roller coaster and these guys will need to be prepared for that,” Hayes said.

“But like anything in life, things don’t always go your way, but I was told if you do the work, you can expect the results at the end of the day – it’s important to always have faith in yourself.

“The boys need to maximise their time in the game and the best way to do this is getting involved in off-field development right from day one.”

“There’s no doubt hearing the messages from guys like Luke Ball and Lenny Hayes carries extra weight with these young men,” said Johnson.

“They need to understand that footy isn’t forever, the average career is about six years and post football opportunities don't materialise overnight – the foundations need to be set early in playing careers.

“Whether they use their education and training grants to undertake vocational study, or take advantage of the financial education services which are presented by former players Brad Wira and Mark Porter, it is important they know that the Players’ Association is here to support them on their journey. And all of these benefits and entitlements are due to the hard work of players who have gone before them.”