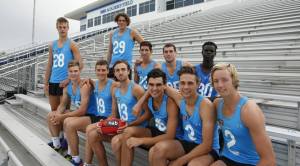 The NAB AFL Academy Level Two squad has returned from a 10-day high performance training camp at the IMG Academy in Bradenton, Florida.

Nineteen players from AFL Victoria’s TAC Cup competition were part of the trip, experiencing a week of intense training at the IMG Academy, which is a private institute for amateur and professional athletes from sports including tennis, American football, soccer, baseball, basketball and golf.

The IMG Academy is world renowned for the development of elite athletes with a focus on responsibility, leadership and determination.

This was the first trip to the USA for the Academy, having toured Europe in recent years.

“This international tour provided our Academy players with the opportunity to experience the nuances of travel and adjusting to the environmental issues of training professionally, in different venues and on varying surfaces from a variety of sports coaches.”

During the trip Gippsland Power player Josh Dunkley kept a tour diary, highlighting his experience at the Academy.

During the stay in Florida the Academy players also trained with former TAC Cup players Joel Selwood (Bendigo Pioneers), Tom Hawkins (Sandringham Dragons), Dan Hannebery (Oakleigh Chargers) and Luke Parker (Dandenong Stingrays) who were at the IMG Academy for testing against other sports from around the world.

The Academy group will meet in Melbourne in April for their next training session.

In 2014 there were 207 graduates of the NAB AFL Academy on AFL lists. Players in this Level 2 squad are eligible for the 2015 NAB AFL Draft in November. At the recent NAB AFL Draft, seven of the top 10 players were Academy players including the first selection Geelong Falcon Patrick McCartin.