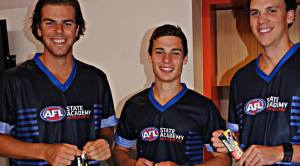 The Academy squad, proudly supported by Dairy Australia, gathered together to learn more about the demands of the Academy program, plus were provided an opportunity to introduce themselves to the AFL recruiting network.

The day also helped educate and inform parents about what is required from their sons in the Academy.

First squad announcements for Vic Metro will be made in early April, with Metro to face Vic Country in Round 1 of the NAB AFL U18 Championships on Sunday May 24.