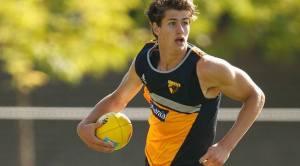 The 2015 AFL NAB Challenge will kick off this Thursday night between Hawthorn and Collingwood at Aurora Stadium, with a number of TAC Cup draftees in the mix to make their debut in club colours.

Hawthorn is set to field a young line up, with 2014 recruits Dan Howe (Murray Bushrangers), Teia Miles (Geelong Falcons) and Marc Pittonet (Oakleigh Chargers) all named in the Hawks squad of 29 for the game, with 26 to be selected.

Hawthorn has also named rookie upgrade Dallas Willsmore (North Ballarat) and James Sicily (Western Jets) in the squad for the game, both drafted at the end of 2013 but played the season for Box Hill Hawks in the Peter Jackson VFL.

Collingwood will unveil just two of its five TAC Cup recruits - No.5 pick Jordan De Goey (Oakleigh Chargers) and pick 48 Matthew Goodyear (Calder Cannons) - against the Hawks. De Goey was one of eight 2014 premiership Oakleigh Chargers players drafted at the end of last year, and will be working against, not with, premiership ruckman Marc Pittonet who will line up for Hawthorn.

After a horror first season on Collingwood's list in 2014, former Sandringham Dragon Nathan Freeman hopes to put his injured hamstring behind him and complete his first preseason game in the AFL with the Magpies. He tore his hamstring in his first NAB Challange game last year, and did not return to the field for the entire 2014 season.