Viojo-Rainbow & Gowers next to be selected 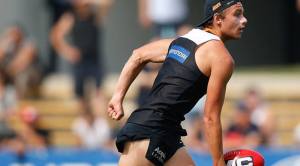 On Friday night the NAB Challenge will be heading to Mandurah in WA, with West Coast hosting Carlton.

We received our first taste of the Eagles in 2015 last week as they faced the Indigenous All Stars, with Tom Lamb (Dandenong Stingrays) and Jackson Nelson (Geelong Falcons) both featuring in that game and named in the squad for the first NAB Challenge clash.

Over at Carlton, two of their four 2014 TAC Cup draftees will be unveiled with pick 28 Dillion Viojo-Rainbow (Western Jets) and rookie selection Billy Gowers (Oakleigh Chargers) named in the squad with another former Charger Kristian Jaksch, who after two years with GWS joins the Blues.

Despite not having played an AFL, the Blues new recruit in Viojo-Rainbow already has a cult following on name alone, featuring regularly in the AFL Movies hashtag doing the rounds during the Oscars.