No.1 pick McCartin to be unveiled 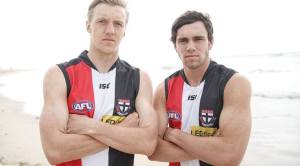 A big weekend of NAB Challenge football will take place across Australia, with games in Moreton Bay, Townsville, Port Lincoln and a return to VU Whitten Oval.

There will be no shortage of 2014 TAC Cup graduates taking to the field, to give club supporters a sneak peek at what they can possibly expect during the home and away season.

Former Bendigo Pioneer Jaden McGrath has been named to kick off his career with the Lions, and will face some familiar facein the opposition St Kilda, with Paddy McCartin (Geelong Falcons), Hugh Goddard (Geelong Falcons), Jack Sinclair (Oakleigh Chargers) and Jack Lonie (Dandenong Stingrays) all set to play at Moreton Bay.

AFL football returns to Whitten Oval Sunday, and while Western Bulldogs are keeping its four 2014 TAC Cup picks under wraps, Richmond is wasting no time in exposing its TAC Cup recruits to AFL football, with six of their seven draftees set to take to the field. Connor Menadue (WesternJets), Nathan Drummond (Murray Bushrangers), Daniel Butler (North Ballarat),Reece McKenzie (Northern Knights), Jayden Short (Northern Knights) and Jason Castagna (Northern Knights) will all take to the field, with over 80% of the players from each side originating from the TAC Cup.

Richmond will have a strong contingent of Knights on its list in 2015, with nine former players listed in 2015, and six to take to the field Sunday including Dylan Grimes and Nick Vlastuin.

In Townsville on Sunday former Calder Cannon captain Touk Miller take to the field for the first time for the Gold Coast Suns, while Jordan Cunico (GippslandPower) will lineup for Geelong.

In the final game of the weekend in Port Lincoln, TAC Cup Team of the year fullback Daniel Nielson (Eastern Ranges) will debut for North Melbourne against Adelaide.