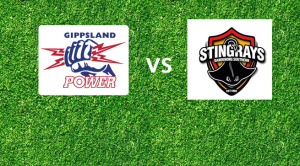 In the lead up to the first game of the season for the country regions, we spoke with the coaches of Gippsland Power and Dandenong Southern Stingrays about season 2015.

We found out from Leigh Brown (Gippsland) and Craig Black (Dandenong) the highlights of the preseason, aims for 2015, who the 19 year old players returning are, players to look out for from each club and who the assistant coaches for 2015 are.