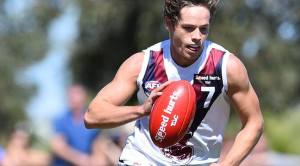 The country regions played their first match for season 2015, Gippsland had a strong win over Dandenong, Calder held off a fast finishing Northern, Murray had a 107 point win against Bendigo, Oakleigh were too good for Eastern, Sandringham got the better of Western by 27 points and Geelong won a thriller with a two point win over North Ballarat.

In perfect conditions at Simonds Stadium Geelong Falcons and North Ballarat played out a match for the ages, with the Falcons holding on to win a tight contest by just two points. Darcy Parish (Geelong) was everywhere, finishing with 34 disposals (22 of those contested possessions) and 4 marks.

Last year’s premiers Oakleigh Chargers are again establishing themselves as contenders again with a 43 point win over Eastern Ranges. It could have been a much bigger score, the Chargers ending up kicking more behinds (16) than Eastern had shots on goal (9). Dan Houston held everything with 12 marks.

Harry McKay had a debut match to remember. In his first match for Gippsland Power the 200cm forward was named in the best after kicking 4 goals. The athletic big man is not afraid to fly for a grab and will be a handful for defenders.

It was a thriller out at Highgate with the Northern Knights spirited second half revival almost stealing the game from Calder Cannons. A five goal to two final term from the Knights wasn’t enough, the Cannons hanging on for their second win of the season. Karl Brown forced his way into the Vic Metro training squad with an 8 goal performance that included the match sealer for Calder Cannons.

They are the tallest team in the competition and that height advantage was on display as Murray Bushrangers tall forwards proved too strong for Bendigo Pioneers. AFL Academy member Josh Schache (Bushrangers) was marking anything that came near him and finished the match with 7 marks and 7 goals.

Corey Rich snared 4 goals to be among the best for Sandringham in their 27-point win over Western Jets. For the Jets Mitchell Palma was best with 26 disposals.

See the Round 2 highlights below :