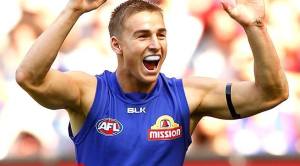 Mitch, 20, was one of the Bulldogs’ best young players in their 19-point victory over Richmond at the MCG on Saturday.

It was his first ever game on the MCG and playing as a small forward, he had 18 possessions and kicked a goal.

The highlight of his match was his defensive pressure; he finished with six tackles and after two rounds is currently ranked third for the Bulldogs in tackles behind Bontempelli and Dahlhaus.

Mitch played three games in 2014 after his debut in Round 15 and was part of the Footscray VFL premiership side.

Mitch was the Bulldogs’ fourth selection (selection 60 overall) in the 2013 NAB AFL Draftfrom Eastern Ranges. He averaged 25 disposals and four clearances during the 2013 NAB AFL Under-18 Championships for Vic Metro earning Under-18 All-Australian honours.

Bulldogs coach Luke Beveridge said: “Mitch is becoming an integral part of a midfield/forward group that will continue to drive the team into the future.”

The 2015 NAB AFL Rising Star winner will be awarded the Ron Evans Medal and a $20,000 personal investment folio and a dedicated personal banker, courtesy of NAB.