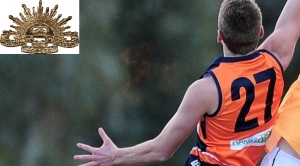 100 years on, Anzac Day is still deeply significant to all Australians.

For many clubs across the Peter Jackson VFL and TAC Cup, football is a way to respect and honour our Anzacs, along with those who continue to serve our great country.

The use of football to remember such a significant part of Australia’s history is not just an honour for the clubs that play on April 25, but all teams playing across the weekend.

This weekend 13 VFL and TAC Cup games will be played, with ceremonies occurring across the majority of games to mark the Anzac Centenary.

The day has a deep meaning for the Calder Cannons, as they remember fallen former player Corporal Cameron Baird (VC, MG), who was killed in operations in Afghanistan in June 2013.

Baird was awarded the Medal for Gallantry in 2007 for his actions in a search and clearance operation of a Taliban stronghold.

In 2014 he received a posthumous Victoria Cross Medal for his acts of valour and self-sacrifice. He is one of only four people to be awarded both the Medal for Gallantry and the Victoria Cross.

This Saturday Calder will perform an Anzac Day ceremony between the two games at RAMS Arena. Geelong Falcons and Bendigo Pioneers will play prior to the Calder Cannons versus North Ballarat Rebels match.

The four teams and two sets of umpires will all line up, with the four coaches laying a wreath at the bottom of the flag pole prior to the ceremony.

Calder has embroidered VCMG onto the number 27 jumper that Cameron Baird wore during his time at the club. Tom Gawthrop, who has the honour of wearing Baird’s former number, will be joint captain for the day and will toss the coin, which will be a 1945 penny.

In the lead up to the game Calder were visited by a 92-year-old WW2 veteran who spoke to the players about the meaning of Anzac Day and shared his experiences.

Calder Cannons Talent Manager Ian Kyte sees the importance to continually educate his young players about Anzac Day, its origins and the meaning of the day.

“By having someone come out and chat to the group the players are made aware of what the day means to other people.

“It helps put football in the right perspective.

“People talk about heroics in football. I don’t think there is any such thing when compared to military service and what some people have sacrificed.”

There is no doubt that all clubs this weekend will reflect and realise how lucky they are to be playing our game of Australian Rules on such a significant weekend.