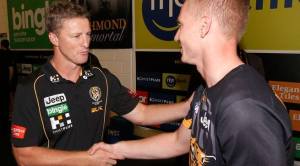 The AFL debut of former Murray Bushranger Nathan Drummond should have been a memorable occasion, running out onto the MCG against Melbourne in Round 4 AFL action.

In the end it was memorable for all the wrong reasons, with Drummond injuring his ACL and facing a long stint on the sidelines.

It had been a long wait for Drummond to reach the AFL ranks, overlooked in his 18th year but impressing as a 19 year old to be selected at pick 52 by Richmond in the 2014 NAB AFL Draft.

His selection was on the back of a best and fairest season for the Bushrangers, and an impressive AFL Combine where he featured in the top 10 of all bar one test.

Drummond highlighted his ability during the NAB Challenge, and after 15 disposals in the opening round of the Peter Jackson VFL season, was selected for his debut.

We wish him well in his recovery.