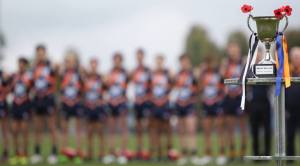 Wet weather football was the order of the day in the TAC Cup last weekend, unless you were the Dandenong Stngrays in Queensland.

A number of clubs also honoured Anzac Day with pregame ceremonies across the competition.

It was the first weekend the interstate teams joined the competition, with Dandenong Stingrays heading to Queensland for 25 degree sunny conditions, as well as win number three for the season. NSW/ACT Rams ventured to Burbank Oval and recorded a win in their first game.

In other results, Geelong Falcons moved to fifth spot with a 48-point win over Bendigo Pioneers, Gippsland Power returned to the top 8 with a 27-point win over Northern Knights, an inaccurate Oakleigh Chargers held off the Murray Bushrangers, North Ballarat kick nine goals to three in the second half to run away from Calder Cannons and Eastern Ranges restricted Sandringham to one goal as they mastered the conditions better to move to second spot.

In Round 5 action two players amassed 43 disposals across the weekend. NAB AFL Academy pair Darcy Tucker (North Ballarat Rebels) and Ben Keays (Queensland) both had a day out, with Keays unlucky not to be named in the best players for his side. Tucker was part of a huge win for the Rebels against the Cannons, helping his side to third spot on the ladder.

Jade Gresham continues his standout season for Northern Knights, and will be one to watch in the upcoming NAB AFL U18 Championships. For the third round in a row Gresham has been named best on ground for the Knights, amassing 30 plus disposals in each of the games. Last week is a losing side he claimed 37 disposals along with 10 marks and two goals.

It was a big round for Anthony Daw. Despite his side going down by just seven points to the visiting NSW/ACT Rams side, he had a day out in the middle with 44 hitouts

The two leading goal kickers in the TAC Cup competition were at either end of the field last weekend, as Calder Cannon Karl Brown kicked three goals to take him to 14 for the season and outright lead on the goal kicking ladder. North Ballarat Rebel Ezekiel Frank jumped into the top 10 with his six goals up forward, moving quickly to second spot. Frank has kicked 12 goals 3 in three matches.

The trip to Queensland had its highs and lows for the Dandenong Southern Stingrays last weekend.  The trip started poorly even before the side reached the airport with Kieran Collins and Lachlan Batten both pulled up injured on the training track Thursday night. Arriving safely in Queensland, the Stingrays squad were lucky enough to have Brisbane Lions coach and Stingrays first draftee Justin Leppitsch address the team, providing a wealth on advice to the group. Despite winning the match against Queensland in the warm conditions, the trip home was soured by an ACL injury in the final term to Stingray Liam Myatt.