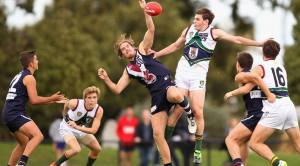 Eastern Ranges jumped to top spot on the ladder with a final term revival against Bendigo Pioneers headlining Round 6 TAC Cup action.

Dandenong Stingrays suffered a heart wrenching two-point defeat at the hands of NSW/ACT Rams while Tasmania made a positive impact in its first TAC Cup clash of the season easily accounting for Sandringham Dragons.

Tasmania’s Nick Dodge certainly made an impact early in the game versus Sandringham Dragons last Saturday. Finishing the game with 22 disposals and 6 marks, Dodge kicked three of his four goals during the first quarter and had nine disposals to quarter time at Warrawee Park Oval.

North Ballarat Rebels kept Oakleigh Chargers goalless in the first term helping set up a convincing 28-point win, while their country cousins Geelong Falcons and Gippsland Power both recorded back to back wins.

Brett Blair had a day out for Geelong Falcons, kicking six goals against Northern Knights. Blair kicked 6.3 for the game, from 11 kicks, 1 handball and 9 marks. The goal haul beat teammate Mitchell Patten’s five goals in Round 5

Murray Bushrangers returned to the winners list completing the round, inflicting Calder Cannons third loss in a row.

ROUND 6 FAST FACT:  Just one home team was able to record a win last weekend – Gippsland Power. The Power led at every change, running away with the game in the final term kicking eight goals to two.

See the Round 6 TAC Cup highlights below: