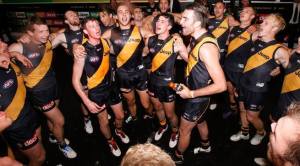 The wait was over last weekend for Richmond’s Liam McBean.

Selected at pick 33 in the 2012 NAB AFL Draft from the Calder Cannons, McBean spent his first two and a bit seasons on the Tigers list playing for Richmond in the VFL, amassing 33 games and 86 goals.

The leading goal kicker in the Peter Jackson VFL so far this season with 12 goals, McBean finally was rewarded with selection in the AFL side in Round 7, and was part of the five-point win over Collingwood with seven disposals.

McBean was joined in the Richmond win by Western Jets recruit Connor Menadue, who only had to wait four VFL games for his AFL debut and ironically was pick 33 in the 2014 NAB AFL Draft.

Also in the side was former Dandenong Stingray Todd Elton who was playing in only his second AFL game since being drafted in 2011.

Photo: Connor Menadue, Todd Elton, Corey Ellis and Liam McBean of the Tigers celebrate their first win for the club.