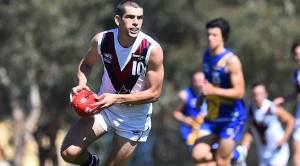 An inexperienced Vic Metro side will take to the field this Sunday at Simonds Stadium in Round 1 of the NAB AFL U18 Championship.

Only three squad members that played in 2014 remain – James Parson, Nick O’Kearney and Mark Kovacevic – but what they lack in U18 Championship experience, they certainly make up for in skill and leadership.

This is typified by the announcement of the 2015 Vic Metro captain.

Sandringham Dragons midfielder Theo Thompson, a player yet to pull on the Vic Metro jumper, will lead the team on Sunday and throughout the 2015 Championships.

He is no stranger to leadership roles across his football career, and is seen as a natural leader for the side despite only making his Vic Metro debut this weekend against Vic Country.

Thompson was the club captain at Caulfield Bears from U14s to U16s, and the Caulfield Grammar student not only has the honour of being football captain this season, but school captain as well.

Named in the Vic Metro squad at U16 level, he was forced to watch from the sidelines after an ankle injury prevented him playing.

He is now ready for his next playing and leadership challenge.

“I am honoured to be given the captaincy,” Thompson said.

“I really didn’t believe it at the start but as it sunk in I just want to make sure I can do a job and serve the team well.”

While many captains are urged to lead from the front, Thompson learnt early that some of the best leaders provide opportunities to others in the team.

“I was told before one of my captaincy roles that leadership is often stepping back and letting others have a role and encouraging that aspect,” he said.

“With the strength of the Vic Metro squad last year, there is an opportunity for our players to step up this year."

The Dragons midfielder is proving a leader off the field as well, as an ambassador for the VicHealth H30 Challenge.

Over the next month Thompson will encourage supporters and spectators to switch from sugary drinks to water for 30 days.

Thompson will help raise awareness of the risks associated with high intakes of sugary drinks which include weight gain and tooth decay.

With nearly two thirds of Victorians currently overweight or obese, and at increased risk of heart disease, type-2 diabetes and some cancers, reducing intake of excess kilojoules through drinks is one way to promote a healthier diet and improved health for the community.

“I was fortunate that my parents brought me up in a way that I never really had many soft drinks and that sort of thing,” Thompson said.

Thompson will be facing his own challenges both on and off the field over the next month, but knowing his experience in leadership he should excel at both.

Sign up to the H30 Challenge and switch sugary drinks for 30 days. www.h30challenge.com.au