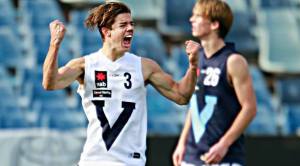 A kick after the siren to Vic Country has sealed a 5-point win over Vic Metro in Round 1 of the NAB AFL U18 Championships.

In a tense finale, Murray Bushranger Jy Simpkin marked a Ben Ainsworth (Gippsland Power) centring kick at the top of the goal square with just seconds on the clock.

As he walked back to take his kick the siren sounded with Vic Country trailing by just 1-point.

Simpkin seemed unfazed by the siren sounding, quickly walking in to kick truly and extend Vic Country’s recent winning streak against Vic Metro to three, and claiming an all-important Round 1 victory.

With Blake Hardwick (Eastern Ranges) and Hasham Kerbatieh (Calder) proving elusive up forward for Metro, Country were struggling to rebound the ball past the middle of the ground.

As quickly as Vic Metro had jumped to an 18-point lead, Country fought back. Dandenong Stingrays Jacob Weitering and Kieran Collins lifted in defence, continually rebounding kicks inside 50.

Country started to hit targets and gain more of the ball in the middle with Rhys Mathieson (Geelong Falcons - 19 disposals) beginning to influence the game. With Sam Skinner (Gippsland Power) and Josh Schache (Murray Bushrangers) unable to find space and being closely minded by Oakleigh pair Jack Firns and Sam McLarty, it was the Gippsland duo of Ben Ainsworth (14 disposals, 6 marks) and Nash Holmes that provided the avenues to goal with two late goals to see Country trail by 7 points at quarter time.

Vic Country cut the margin to one point just minutes into the second term, as Schache marked strongly to convert. After a defensive struggle Metro saw Hardwick add his second goal and Gresham run into and open goal for his first, but Country once again hit back leading up to half time, kicking three late goals to take the lead.

Jarrod Berry (North Ballarat Rebels) kicked two and Ainsworth was finally rewarded for multiple shots on goal with his second major, which had Vic Country up by six points at half time.

While Gresham levelled the scores for Vic Metro six minutes into the third term, Country started to find targets up forward with Skinner, Tom Cole (Bendigo Pioneers) and Joe Maishman (Geelong Falcons/Werribee) all scoring to see Country out to an 18-point lead midway through the term.

The topsy turvy nature of the game continued before three quarter time, with Ben Crocker (Oakleigh Chargers - 24 disposals) rebounding off half back for Metro, helping Jack Silvagni (Oakleigh Chargers) and Balic goal to see Metro trail by 7 points going into the final stanza.

Metro entered the final term with McLarty and Kovacevic on the sidelines, forcing a reshuffle down back and the move of Jayden Collins (Eastern Ranges) into the middle along with Crocker.

Ten minutes of end to end football followed, as neither side could gain the advantage. Schache showed his strength up forward to mark and goal, and suddenly 14 minutes into the final term scores were again level.

Balic put Metro in front by 1-point at the 18 minute mark, but there was still plenty of time for a Country comeback. O’Kearney lifted his tackling pressure and was resolute in the final minutes, but Metro could not put the game beyond doubt.

With 30 second left in the match, Vic Country started their final charge on the outer wing, pushing the ball inside 50 with Ainsworth quick to rove the pack. Like it was scripted, he looked up and saw Simpkin by himself at the top of the square, and his pin point pass found the target, and helped set Simpkin for the match winner.