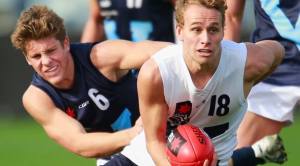 The teams have been announced for Round 2 of the NAB AFL U18 Championships, with Vic Metro heading to SA Saturday and Vic Country to WA Sunday.

Vic Metro has made seven changes to its Round 1 lineup, with Callum Moore, Jordan Gallucci, Goy Lok, Tyrone Leonardis, Jarrad Smith, Jordan Matera and Tom Cameron all named in an extended squad to face South Australia on Saturday at AAMI Stadium at 10:45am.

Vic Country heads to Western Australia on Sunday in a matchup of the Round 1 victors, with four changes likely to be made, with Tommy Glen, Harry McKay, Matthew Johnston and Myles Poholke all added the an extended squad.