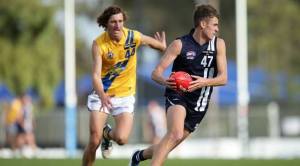 The North Ballarat Rebels maintained their hold on top spot of the ladder, three of the interstate teams struck a blow to Victorian opponents and the first draw of the season was played out during Round 9 of the TAC Cup season.

North Ballarat braved the elements in Ararat to see off the Sandringham Dragons in a slogging, low-scoring affair. With only five goals kicked for the day, the Rebels’ two majors in the final quarter proved decisive, a 13-point defeat consigning the Dragons to a 2-6 record.

The Oakleigh Chargers travelled to the Sunshine State to take on Queensland but came back empty-handed after being on the receiving end of a five-goal performance from Wylie Buzza. The big Queenslander was best-on-ground in his team’s eight-point victory, their first in three matches this season.

Elsewhere around the country, Tasmania kept its perfect 2015 record going with a comfortable 22-point triumph over the winless Bendigo Pioneers, and the Northern Territory lost its first game of the season to a red hot Murray Bushrangers squad, the Thunder succumbing at home to the tune of 74 points.

The fourth interstate team, the NSW/ACT Rams, travelled down to Box Hill City Oval and left with a 37-point win – their fourth out of five this year – over an inaccurate Eastern Ranges outfit (0.15 at half-time, 4.16 for the day), as the Dandenong Stingrays held off the Northern Knights by 19 points in spite of a sluggish start to the match and an incredible 52-disposal, four-goal effort from Northern’s Kieran Malone.

The Geelong Falcons, like the Stingrays, established themselves in the top four by taking care of the Western Jets by 60 points, while the Gippsland Power let a 31-point quarter-time lead slip to end up drawing with a dogged Calder Cannons outfit, the TAC Cup season’s first tie of 2015.