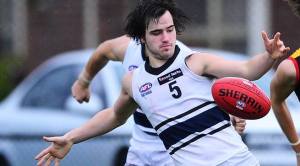 It is not every day that a player produces a 52-disposal game in the TAC Cup.

Add to this four goals – one from the centre of Preston City Oval – and it was an exceptional performance from the Eltham footballer.

Despite sending the Champion Data statisticians into a spin, Malone was modest about his massive possession haul.

“It was one of those lucky days I suppose when you’re in the right spots and the ball just comes your way, and you don’t fumble it,” Malone said.

“It’s nice but it would’ve been nice to have a win for the Knights.”

The move into the midfield has only been recent for Malone, and his increased possession count reflects his improvement and increased workrate since the change.

“As a junior footballer, I’ve always been just a midfielder, and the last 18 months I’ve been playing half-forward,” Malone said.

“I was playing alright at half-forward, but I had a few shots at goal and unfortunately they were either missing or just not quite getting the distance, so I think I just moved into the midfield.

“It was going to be a progression thing but I probably started exceeding my own expectations and playing really good footy.”

“I know last year I spent a couple of games in there as a bottom-ager and I credit our conditioning coach as he really pushed me along to get a lot of decent numbers on the GPS.

“Last year my numbers were pretty low and this year it’s just a big jump.”

Workrate has been key in his feedback at Vic Metro Academy level, with Malone making the initial but not final squad for the 2015 NAB AFL U18 Championships.

“I got a letter in November saying ‘you’re in the initial 30,” he said.

“From there I think a lot of kids think they can get into an AFL system and they think it’ll be pretty easy, but you’ve got to get knocked early on so you become a better player and I think that’s helped me along the way.

“I just really wanted to make a stand and show them I could really improve in that area (work rate), and I think I have but there’s still a long way to go.”

With a development weekend in the TAC Cup, Malone will line up for the Northern Blues in the Peter Jackson VFL as 23rd player. It will be another challenge for Malone, as he sets his goals for the rest of the season.

“I’m using this as a starting point really,” he said.

“I’m not expecting to go out and get 50 touches every week, just play consistent good footy and keep putting my hand up.”

See some of Malone's 52 disposal game below: