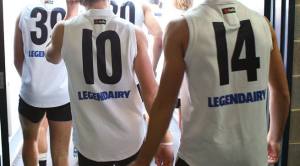 The teams have been announced for the interstate trips this weekend in the NAB AFL U18 Championships, with Vic Metro v WA and Vic Country v SA.

The top two teams in the NAB AFL U18 Championships will meet this weekend, with South Australia to host Vic Country in Round 4.

For the last decade SA has been the bogey team for Country in the Championships, with the best from South Australia having taken the points in the last nine contests.

Vic Country heads into the game undefeated with two wins against Vic Metro, and an away win against WA in Round 2. SA has shared the results with WA in their two encoutners, and a strong start against Vic Metro in Round 2 saw them comfortable victors.

Vic Country, proudly supported by Dairy Australia and their Legendairy campaign, will once again make four changes to their winning lineup from Round 3, with Myles Poholke (Dandeong Stingrays), Yestin Eades (North Ballarat Rebels) and Christian Buykx Smith (Gippsland Power) returning to the line-up, along with debutant Brandon White (Dandenong Stingrays). They come into the side for injured pair Tom Doedee and Ryan Hearn, with David Mennen and Kurt Mutimer rested.

Vic Metro will be looking for its first win of the Championships and will have up to 10 changes for its trip to Western Australia.

Nick O’Kearney will be rested for the first time in the Championships, along with Dan Houston, Kade Answerth, Mark Kovacevic, Andrew Tashevki-Beckwith, Alex Morgan, Sam McLarty and Kane Keppel in the rotations, while Theo Thompson and Ben Crocker are set to miss through illness/injury.