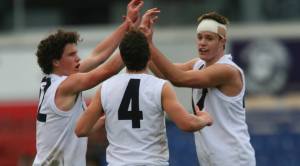 With Vic Country ending a huge hoodoo at the NAB AFL U18 Championships on Sunday by defeating South Australia for the first time in 10 meetings, it’s worth looking back on the last Country team to have knocked off the Croweaters – way back in 2006.

Country prevailed by 31 points on that day at Simonds Stadium, led by a three-goal performance from former North Ballarat Rebel and now West Coast player Mitch Brown. The key-position player was taken by the Eagles with pick no.16 in the AFL Draft later that year and has since played 90 AFL games.

Brown’s twin brother and North Ballarat teammate Nathan was named in the 2006 U18 All Australian team at full back, also being drafted at the end of the season with Collingwood’s pick no.10 in the Draft. He has gone on to play 104 games at the top level including the Magpies’ 2010 premiership success.

Current North Melbourne defender Lachlan Hansen was also a part of the Country team, the former Gippsland Power player earning All Australian selection at centre-half back before being taken with pick no.3 in the 2006 Draft and playing 123 games for the Kangaroos.

Others to star that day included:

-      Ex-Murray Bushranger Jarrod Harbrow, who booted three goals against SA and was later picked by the Western Bulldogs at no.27 in the AFL Rookie Draft, before moving to the Gold Coast Suns in 2011 (157 AFL games);

-      Former North Ballarat Rebel Shaun Grigg, who was named on the wing in the U18 All Australian team and was drafted by Carlton at pick no.19 in the AFL Draft before shifting to Richmond in 2011 (134 AFL games);

-      Another past North Ballarat Rebel, current Hawthorn key defender James Frawley, who was initially taken by Melbourne at pick no.12 in the AFL Draft (145 AFL games);

-      Ex-St Kilda player Robert Eddy, who played in the 2010 Grand Finals for the Saints after being picked in the 2006 Rookie Draft at no.39 from the Gippsland Power on the back of an All Australian U18 campaign (33 AFL games); and

-      Gippsland’s Ben Ross, who became a North Melbourne player when the Kangaroos took the midfielder at pick no.7 in the 2006 Pre-Season Draft (18 AFL games with North Melbourne and Hawthorn).

Vic Country ended up finishing second on the Division 1 U18 Championships table behind the undefeated Vic Metro side, who beat Country in wet conditions in the final game of the Championships.