A man loved by all 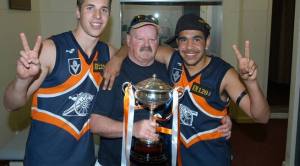 Long-time Calder Cannons trainer and Hall of Fame member Phil Dunk made an impact on the lives of everyone who has passed through the club in his 21 years of service there.

Dunk was 69 years of age when he passed away on May the 2nd this year, shortly after the Cannons faced the Murray Bushrangers in Round 6 of the TAC Cup.

Calder Talent Manager Ian Kyte paid tribute to the man who was a part of the TAC Cup since its inaugural season of 1992, spending three years at the Western Jets before joining the Cannons when they entered the competition in 1995.

“Phil had the ability to talk to everybody and know something about them to talk to them about, and that made you think you were the only person he spoke to like that,” Kyte said.

“He never missed saying hello to anybody or talking to them about something personal, not just about footy.

“He built up a pretty intimate knowledge of nearly everybody at the club.”

Kyte said Dunk did most of his talking from his chair in the Calder trainers’ room, which has since become a memorial with a photo of Dunk displayed above it.

In fact, hours before he passed away, Kyte tells of how Dunk was sitting on that very chair watching another squad of young Cannons run past him onto the playing field.

“It was really interesting – he was sitting in his chair near the door as the boys were going out and our conditioning guy said to them, ‘Don’t forget to give Phil a pat on the head as you go past’, and every boy who ran out to play that day gave Phil a tap on the back or rubbed his head as they were heading out,” Kyte said.

“It was a fairly fitting farewell.”

Kyte said it was testament to Dunk’s impact on 24 years’ worth of TAC Cup players that so many of them who went on to become AFL stars attended his funeral.

Among them was Richmond ruckman Ivan Maric, who said the humbling experience made him think about whether he truly appreciated the impact Dunk’s qualities had on the club while he was alive.

But Maric knows he’ll be seeing evidence of them for years to come.

“Maybe those qualities have passed on through a lot of players,” he said.

Maric said Dunk was someone who made him feel truly welcome in a new world of elite underage football.

“(At first,) I didn’t really know anyone in the football world, but he knew my name and knew how to say it properly,” Maric recalled.

“Then, even when I left and went to Adelaide, he’d still text me and ask me how I was going.

“I went back and did some coaching there in the last couple of years, and he was still there – nothing had really changed. He was always asking everyone how they were going, making sure they were alright.”

A more recent Cannon to have been impacted by Dunk is Gold Coast half-back Adam Saad, who said his enduring memories of the man who so often taped him up was simply having a laugh together.

“He was always the one at the club who you could just go to and speak about things other than footy.

“He was actually one of a kind.”

Ian Kyte said Dunk would be sorely missed by everyone he came into contact with, including the Calder medical staff who would revel in dragging Dunk onto the ground at training to walk laps of the oval with them.

“It was interesting recently – one of our physios got a little bit upset when he walked into the trainer’s room,” Kyte recalled.

“His parting gesture would be to yell at Phil and say, ‘Have you walked your laps yet, you lazy so-and-so?’ and Phil would have a go back at him, but our physio walked into the room (that day) and said, ‘He’s not here... Who am I going to yell at?’

“It’s those things (we’ll miss); while he’s gone, it’s going to be a long time before he’s forgotten.”