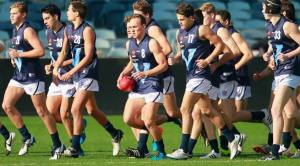 The final squads of 25 for NAB AFL U18 Championships have been announced, along with the teams for Round 5 this Friday at Simonds Stadium.

Vic Country could have up to six changes for its rematch with SA, with Josh Dunkley set for his first U18 Championship game of 2015. He will join Bailey Rice, David Mennen, Joe Maishman, Tom Doedee and Kurt Mutimer in the drought breaking squad that defeat SA on their home turf in Round 4.

Vic Metro sees the return of captain Theo Thompson to the lineup, along with Alex Morgan, Nick O'Kearney and Ben Crocker. Vic Metro will aim for back to back wins, after defeating WA in Round 4.

Both matches will be shown live on FOX Footy with Vic Country facing SA at 12:35pm and Vic Metro hosting WA at 2:35pm.