Can Country produce a clean sweep? 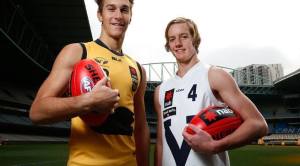 Vic Country has won the NAB AFL U18 Championship title, but can they produce a clean sweep of six from six wins?

Country will complete its successful Championship campaign today at Simonds Stadium against WA, with the powerful side on show one last time.

Having won the U16 title in 2013 under the same coach - Paul Henriksen - 13 members of that victorious team will again be out on the field today claiming the U18 title, with 15 players in total from 2013 part of the 2015 squad.

The game will be live on FOX Footy from 1:05pm or follow score updates on Twitter @TACCup.

See the Round 6 team below: