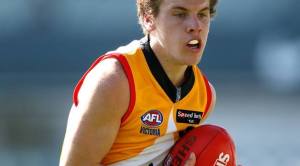 Last year’s MVP for Vic Country at the NAB AFL U18 Championships has been recognised for his stellar first-year efforts in the AFL with a NAB Rising Star nomination.

Former Dandenong Stingray Jack Lonie lit up the forward line for St Kilda in the club’s 110-point triumph over Essendon at Etihad Stadium on Sunday.

The 18-year-old small forward had 18 disposals, five inside-50s, two goal assists and kicked one spectacular bouncing goal from the boundary line against the Bombers.

The Seaford junior was drafted by the Saints with pick no.41 in the 2014 NAB AFL Draft and has only missed one match since making his senior debut in Round 1.

Lonie’s pressure up forward has been a highlight of his short AFL career to date, averaging 3.2 tackles per game. He also averages 12.7 disposals per game and has booted 10 goals.