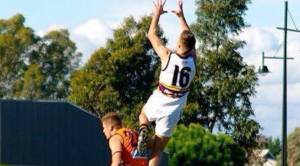 After missing out on being drafted to the AFL last year, he has a new attitude to football, is playing in a new position, living in a new city and representing a new club.

The 195cm 18-year-old from Albury was disappointed when his name wasn’t read out by an AFL club in November, but he’s using that disappointment to craft an impressive season with Murray as an overage player in the TAC Cup and with Footscray in the Peter Jackson VFL.

“I haven’t given it (possibly being drafted) a thought this year,” Coughlan said.

“I’m just trying to enjoy my footy rather than worrying about what will happen at the end of the year, because that’s what sort of drove me down a little bit last year.

The Bushrangers have certainly been successful so far in 2015, sitting in second spot on the ladder with a record of 8-3.

A factor in that success is Coughlan’s switch from attack into defence, which has seen him named in Murray’s best players six times in nine games played.

“Last year we had a few key backs in Caleb Marchbank and Dave Mennen, and we didn’t really have a key forward, so I set up there,” Coughlan said.

“We just decided that after last year when I didn’t play very well and had an interrupted season (through injury), it might be a good idea to turn around and have a go down back, and it’s paid off.”

As a Hawthorn supporter, Coughlan has taken note of the way Hawk key defenders Josh Gibson and Brian Lake can expertly balance defence and attack.

In a similar vein, his natural strength of long kicking has been put to good use by the Bushrangers’ coaches.

“They’re sort of giving me a licence – when I can go on the attack – to go as hard as I can,” Coughlan said.

“The way (Gibson and Lake) are able to read the ball, watch it come in and then work off their man is something I feel I can do fairly well.

“You can chase around your opponent all day and then all of a sudden you’re able to run off, and you’re always running in the same direction – I like that aspect of the game.”

Another new experience for Coughlan this year has been moving to the big smoke of Melbourne.

The country boy is now cooking and cleaning for himself, and has been training with Footscray since March.

Last Saturday, Coughlan played his fourth match for the Bulldogs as the 23rd man, in what was another chance to show his wares to AFL recruiters.

They’d know that 19-year-old Murray players have a good track record of being drafted in recent years, with Collingwood’s Jamie Elliott (2011), Fremantle’s Matt Taberner (2012), Hawthorn’s Daniel Howe (2014) and Richmond’s Nathan Drummond (2014) all coming through the club.

But this year – one of many changes for Nick Coughlan – he won’t be worrying too much about what those recruiters are thinking.