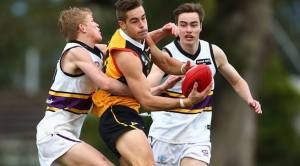 Dandenong key defender Weitering highlighted his credentials with some assured intercept play in his team’s 31-point triumph while Murray key forward Schache booted one goal, with poor weather conditions and delivery inside 50 limiting his opportunities.

The Stingrays also benefited from the return of several other stars of Vic Country’s successful U18 Championships campaign, with Kurt Mutimer, Brandon White and Mitchell Cox named in Dandenong’s best players.

The victory saw the Stingrays move into outright second on the ladder with a record of 9-3, just ahead of the 8-4 Bushrangers.

Three other teams are now even on premiership points with Murray after impressive wins in difficult conditions.

The Geelong Falcons were perhaps the most impressive of those sides in knocking off the league-leading North Ballarat Rebels by 40 points at Eureka Stadium.

The Falcons got stronger as the game got longer, kicking nine goals to one after quarter-time to inflict the Rebels’ second defeat of 2015.

The Chargers had eight more scoring shots than their opponents but only won by three points with a late goal, putting seventh-placed Gippsland 10 premiership points adrift of the top six teams.

The Eastern Ranges were the third side to advance to an 8-4 record, defeating the Northern Knights by 12 points in a slog at Preston City Oval.

In other Round 13 results:

-      The Calder Cannons maintained their spot in the top eight with a 72-point win over the Western Jets at a soggy Burbank Oval, and

-      The Sandringham Dragons kept in touch with Calder by defeating the Bendigo Pioneers by 57 points at Warrawee Park.

See below the Round 13 highlights package:

This weekend will be a development weekend for the TAC Cup, with Round 14 to be played on July 25/26