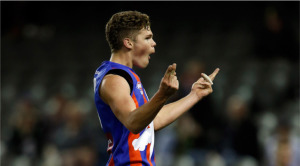 The last time the Oakleigh Chargers faced the Calder Cannons, it was in the 2014 TAC Cup Grand Final and Dan Houston knows he was lucky to be on the field when the final siren blew.

The 2015 Chargers co-captain left the field before half time in Oakleigh’s 47-point premiership triumph, having landed hard on the Etihad Stadium turf after a fall in a marking contest.

As his team prepares to face the Cannons at Warrawee Park on Saturday – the first meeting between the clubs since last year’s decider – Houston reflected fondly on that one day in September.

The 187cm forward returned to the field in the second half and proceeded to kick three goals as the Chargers ran away from their opponents.

“It was a pretty surreal experience,” 18-year-old Houston said.

“When I came back on, I was pretty lucky – it sort of all just happened and the boys looked after me (in setting up the goals).

“Getting the win was one of the best feelings ever and something I’ll remember for the rest of my life.”

Being part of Oakleigh’s success was seemingly meant to be for Houston – he had defied the odds just to make the Grand Final team after a broken finger kept him out of the club’s previous two finals.

Another of Houston’s teammates that day was his co-captain for 2015, Ben Crocker.

Houston said his seven games leading the Chargers so far this season had provided a steep learning curve but that having Crocker alongside him was a big help.

“We have a mix of different types of leaders – Ben leads on the field and I lead more so off the field, and I think we work together really well,” Houston said.

“Some of my favourite things are just getting the vibe up and getting around to everyone on the training track, making sure the bottom-agers feel comfortable and talking to players before the game.”

The leadership role doesn’t appear to have negatively impacted Houston’s form on the field, with the Vic Metro representative playing three matches at the NAB AFL U18 Championships and booting 17 goals in the TAC Cup this season.

He’s hoping his similarities, in terms of size and playing style, to Hawthorn’s Jack Gunston appeal to AFL clubs in search of a mobile medium forward come AFL Draft time in November.

“I kick more goals playing as the strong close-to-home forward, but when I’m not, I can also push up the ground between the arcs and use the ball well through there,” Houston said.

But his opportunities to impress further in 2015 have been halted by a hip injury that will see him sidelined for the next three weeks.

However, with Oakleigh closing in on another top-four finish to the TAC Cup home-and-away season, Dan Houston will be striving to make another timely return to the field as he did in last year’s finals series.