Nyuon’s journey far from over 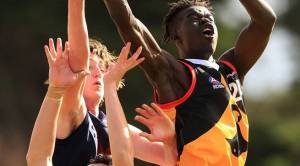 You’d be forgiven for thinking Gach Nyuon would be happy with how far he’s come in his football journey.

The Dandenong Stingrays ruckman hadn’t even played the game four years ago, yet has risen to become arguably the best underage ruck prospect in the land.

Nyuon’s family fled war-torn Sudan when he was an infant and were eventually able to fly to Australia from Kenya when he was seven years old.

The athletic 198cm big man initially played soccer but turned to Australian football when some mates took him to pre-season training at the Narre North Foxes in December 2011.

Fast forward to 2015 and the 18-year-old has been an integral part of a talented Dandenong outfit in the TAC Cup and won All Australian selection for his performances during Vic Country’s undefeated run at the NAB AFL U18 Championships.

The rise has been rapid, but Nyuon certainly isn’t resting on his laurels.

“I’m not too happy with the way I’ve been playing this year, but not too stressed about it either.”

While his spectacular athleticism has never been in question, Nyuon said he still needed to work on certain aspects of the modern ruckman’s game.

In particular, he wants to improve his hitouts-to-advantage, possession-winning around the ground and contested marking.

Nyuon’s Sudanese heritage means he shares common ground with someone well-equipped to help him.

“I’ve got his number and I give him a buzz whenever I need help with anything football-wise – (he also helps in relation to) the way I carry myself off the field, being punctual and respecting others.”

Nyuon clearly respects what his teammates at both the Stingrays and Vic Country are doing for him, preferring to credit them for some of his eye-catching performances so far this year.

“At Vic Country, I’d played with guys like (midfielders) Darcy Parish, Darcy Tucker and Rhys Mathieson at the U16 Championships, so it was a lot easier to communicate with them this year,” Nyuon said.

“They knew how I played and I knew how they played, so I knew where to tap it to them and they made me look good.

“At Dandenong, we have guys like Jacob Weitering and Kieran Collins hitting me up whenever the ball’s coming out of the back line, so I’m pretty happy to have them down there too.”

As the football world celebrated Multicultural Round last weekend, it’s worth considering how far removed Gach Nyuon’s football experience has been from many young players’ upbringings.

The fact he’s already achieved so much isn’t lost on him, but he’s determined to make sure there’s a long way to go yet on this journey.