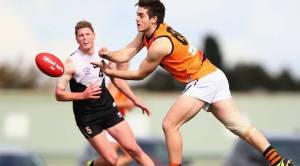 The TAC Cup final eight is effectively settled with one home-and-away round to play, after the Sandringham Dragons failed to overcome the Gippsland Power in Round 17 action.

The ninth-placed Dragons needed to win both their remaining games and hope the eighth-placed Calder Cannons lost both of their matches to sneak into the finals.

However, despite Calder losing to the ladder-leading North Ballarat Rebels by 26 points at Eureka Stadium on Saturday, Sandringham went down to Gippsland by 51 points later that day.

The Dragons started brightly at Morwell Football Ground, leading the Power by nine points at quarter time, but Gippsland turned the screws with six goals to two in the second term and never looked back.

Meanwhile, the Eastern Ranges enjoyed an important 49-point win away from home against the third-placed Murray Bushrangers at Norm Minns Oval.

In a see-sawing battle, Murray led by three points at half time and trailed by 10 at the last break, before Eastern let loose with a devastating seven-goal-to-one final term.

The victory sees the Ranges maintain their hold on fourth position for another week ahead of the Geelong Falcons (who are even with them on premiership points) and at the same time drew to within two premiership points of the Bushrangers.

The Falcons also accounted for a fellow top-eight team in convincing fashion at Warrawee Park, knocking off the sixth-placed Oakleigh Chargers by 30 points.

With just one point in it at the main break, an eight-goal Geelong onslaught in the third term opened up a match-winning 41-point lead at three-quarter time.

In Round 17’s other matches:

-      The Dandenong Stingrays kept pace with the Rebels in the race for the minor premiership in defeating the Western Jets by 85 points at Burbank Oval; and

-      The Northern Knights recorded a well-deserved third win of 2015 by beating the Bendigo Pioneers to the tune of 83 points at Epsom Huntly Reserve.