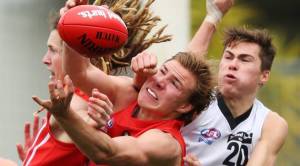 The Eastern Ranges were unable to sew up a top-four spot and finals double chance in the last home-and-away round of the TAC Cup season, allowing the Geelong Falcons to swoop into fourth place.

Eastern ran into a Sandringham Dragons outfit determined to finish off their 2015 season in style at Rams Arena, losing a tense battle by five points after leading by 11 at half time.

The loss proved costly for the Ranges, who started Round 18 in fourth spot – even on premiership points with the fifth-placed Falcons but comfortably ahead on percentage.

A win was all Eastern needed to set up a qualifying final date with the North Ballarat Rebels this week, but Geelong instead seized the chance the Ranges couldn’t take.

The Falcons scored a 36-point victory over the second-placed Dandenong Stingrays at Simonds Stadium, despite having only one more scoring shot than their inaccurate opponents.

Dandenong now enter a qualifying final against the Murray Bushrangers, who defeated the Bendigo Pioneers by 66 points in Rochester to seal third position.

In addition to the Ranges, the sixth, seventh and eighth-placed teams also lost last week in less-than-encouraging warm-ups for finals.

The Oakleigh Chargers (6th) went down to minor premier North Ballarat by 34 points at Eureka Stadium, while their opponents in an elimination final this week, the Gippsland Power (7th), were toppled by the 10th-placed Northern Knights at Ikon Park.

Northern’s thrilling one-point victory was its second straight to finish the season and came after trailing the Power by 22 points at three-quarter time.

But in perhaps the biggest upset of the round, the Western Jets climbed off the bottom of the ladder by recording just their second victory of 2015 over the Calder Cannons (8th) at Rams Arena.

Fielding a particularly young team, the Jets flew free of their western neighbours in the third term and then weathered a final-quarter comeback to win by nine points.

40: The Calder Cannons may have had 33 more disposals, 14 more inside-50s and six more scoring shots in their nine-point loss to Western, but the Jets got over the line in no small part due to sticking 40 more tackles than their opponents. Jaycob Hickey (13 tackles) and Brayden Monk (12) led the way for the victors.

13: Sandringham overcame the Eastern Ranges by getting it done at the coalface. Despite Eastern boasting several quality ball-winners, the Dragons won the ball in the contest – recording 13 more clearances than the Ranges – and then kept it off their opponents by having 68 more disposals. Sandy’s chief clearance winner was Fergus Borthwick with nine.

15: The Dandenong Stingrays will have to clean up their work in front of the big sticks ahead of their qualifying final this week after kicking 3.15 against Geelong. The Falcons only had one more scoring shot than the Rays but still emerged as 36-point winners.