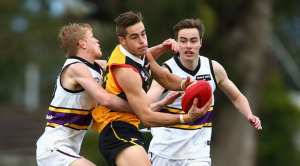 A preliminary final berth is on the line in this week's North Ballarat vs Geelong and Dandenong vs Murray match-ups.

The Rebels may have finished the home-and-away season one game clear on top of the ladder, but they’d be worried about having to face the Falcons this week. North Ballarat has lost just three games this year, but two of them were to Geelong. The Falcons held off the Rebels to triumph by two points in Round 1 at Simonds Stadium, but in Round 13 away from home at Eureka Stadium, Geelong showed just how powerful it could be, defeating the ladder leaders by 40 points. Star Falcons pair Rhys Mathieson (30 disposals, 10 clearances, one goal) and Darcy Parish (27 disposals, eight clearances, one goal) were the chief destroyers in the middle, while Brett Blair and Zach Zdybel both booted three goals for Geelong.

After missing that match, North Ballarat will benefit from having Jacob Hopper back in the line-up, who had 27 disposals and kicked four goals in the teams’ first encounter. The pressure was truly on in Round 13, with both teams recording a huge 116 tackles – expect a similarly fierce contest on the finals stage this weekend.

The only meeting between Dandenong and Murray this season was billed as the battle of two potential no.1 NAB AFL Draft picks – Stingrays defender Jacob Weitering and Bushrangers forward Josh Schache. In the end, it was Dandenong’s back line that ruled the day in a 30-point Round 13 victory at Shepley Oval. The contest was over by half time, when the Stingrays had restricted the Bushrangers to just five behinds and opened up a 43-point lead. Schache booted a goal, but Weitering was one of Dandenong’s best with 21 disposals and 12 marks, while Kurt Mutimer (29 disposals, nine inside-50s, seven clearances) was dominant in the middle and James Freeman (three goals) hit the scoreboard.

There wasn’t much difference between the teams in key statistical indicators that day, with disposals, marks, clearances and tackles all relatively even – instead, the difference was in the Stingrays proving more potent once inside 50. Key Murray midfielders such as Clayton Oliver, Murray Waite and Fletcher Carroll will need to be efficient with their ball use when looking for Schache up forward this weekend.

CLICK HERE to listen to both games live on TAC Cup Radio over the weekend.