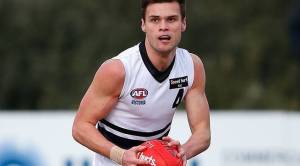 Ex-Northern Knight Ben Lennon has been rewarded with a NAB AFL Rising Star nomination for his performance in Richmond’s 27-point win over Essendon in Round 22.

The 20-year-old forward/midfielder had 16 disposals and held onto nine marks in wet conditions at the MCG on Saturday night.

Lennon has played eight senior matches this year after notching seven in his debut season in 2014.

The Macleod junior was selected by the Tigers with pick no.12 at the 2013 NAB AFL Draft after representing Vic Metro and being named in the 2013 TAC Cup Team of the Year.

Lennon is averaging 11 disposals per game and has kicked six goals for Richmond in 2015.