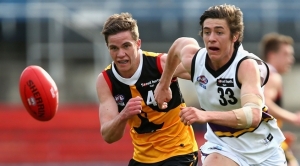 The North Ballarat Rebels and Dandenong Stingrays progressed to preliminary final weekend with thrilling Qualifying Final victories over the Geelong Falcons and Murray Bushrangers respectively, while the Calder Cannons and Gippsland Power bowed out of season 2015 following Elimination Final losses to the Eastern Ranges and Oakleigh Chargers.

1st Qualifying Final
NORTH BALLARAT REBELS 16.15 (111) d GEELONG FALCONS 15.9 (99)
It looked unlikely that the Falcons could be overrun by the Rebels after leading by 32 points midway through the third quarter, but a thrilling encounter soon erupted. Geelong’s Charlie Curnow dominated the match early before North Ballarat finally started to turn things around, hitting the front through a Connor Byrne goal midway through the final term and never being headed again. After letting this one slip, the Falcons must now regroup for a semi final against the Eastern Ranges.

2nd Qualifying Final
DANDENONG STINGRAYS 10.13 (73) d MURRAY BUSHRANGERS 10.7 (67)
A nerveless Josh Freeman set-shot goal in the shadows of the final siren broke a tense deadlock and put the Stingrays into a preliminary final ahead of a brave Bushrangers outfit. Every time Dandenong threatened to run away with the match, Murray would respond in kind, even snatching the lead through a Max Canfield major during the last quarter. However, it wasn’t enough to prevent the Stingrays sending them to a semi final meeting with the Oakleigh Chargers.

1st Elimination Final
EASTERN RANGES 17.8 (110) d CALDER CANNONS 11.10 (76)
The Ranges were never truly threatened by the Cannons as they set up a semi final date with the Geelong Falcons. Eastern found plenty of space inside 50 over the first three quarters, with Ryan Clarke booting four goals and Blake Hardwick three. The contest was over by the final change with Calder kept goalless in the third term and the Ranges opening up a 64-point advantage.

2nd Elimination Final
OAKLEIGH CHARGERS 19.12 (126) d GIPPSLAND POWER 7.6 (48)
Following an opening-term arm wrestle, the Chargers took complete control of the contest after quarter time to advance to a semi final against the Murray Bushrangers. Ben Crocker and Tom Phillips started hitting the scoreboard as Oakleigh booted five second-term goals to nil to set up the match. Meanwhile, Tom Papley played almost a lone hand in defeat for the Power, kicking five of the team’s seven goals.