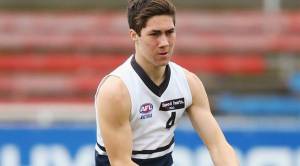 Jade Gresham has added to the Northern Knights’ rich history in the TAC Cup Coaches Award by comfortably taking out the 2015 version, presented at the Morrish Medal night on Sunday.

The 18-year-old Knights captain became the seventh player in the club’s 24-year history to claim the award, which is based on a system of 5-4-3-2-1 voting done by both coaches in combination after each game.

Gresham finished one vote behind Murray Bushranger Clayton Oliver in the Morrish count but turned the tables in the Coaches Award, finishing on 39 votes – eight ahead of Oliver.

Gresham polled in 10 of his 13 games played, including five-vote performances in wins against the Sandringham Dragons (Round 3), Bendigo (Round 17) and the Gippsland Power (Round 18), and five four-vote matches.

He booted 15 goals while averaging over 29 disposals and almost five tackles per game in 2015, and was ranked no.2 in the league for total kicks.

Despite Oliver polling 14 of a possible 15 votes in the final three home-and-away rounds, Gresham effectively had the award in his keeping a fair way from home.

His triumph ended the three-year run of North Ballarat Rebels winning the award, with AFL draftees AFL players Jake Lloyd (2012), Louis Herbert (2013) and Oscar McDonald (2014) all graduating to the elite level after their success.