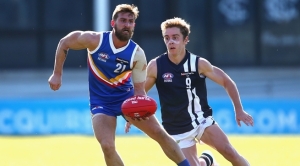 Metro upstaged Country on Semi Final Sunday, with the Eastern Ranges and Oakleigh Chargers progressing to preliminary finals at the expense of the Geelong Falcons and Murray Bushrangers respectively. After finishing the home-and-away season in the top four, Geelong and Murray weren't able to take advantage of the double chance, exiting the TAC Cup Finals Series in straight sets.

The Ranges bundled the Falcons out of the finals in straight sets by capitalising on Geelong’s inaccuracy in front of goal and then putting the foot down in the second half.

Eastern was able to apply scoreboard pressure on the Falcons early in the match with its efficiency inside 50 (leading 7.3 to 3.6 at half time), while Geelong struggled to take its chances. Falcons key forward Charlie Curnow only managed three behinds for the game and was kept relatively quiet by Ranges defender Jack Maibaum, while Blake Hardwick (three goals) and the classy Jayden Stephenson (two) got it done at the other end.

Eastern got stronger as the match went longer, booting eight second-half goals to Geelong’s three and benefiting from the relentless run of their midfield brigade – in particular Ryan Clarke, who had 30 disposals in a stand-out performance – to progress to a preliminary final date with the Dandenong Stingrays.

The Chargers made it two from two for the Metro teams against the Country sides on Semi Final Sunday, with a tense victory over a brave Bushrangers outfit.

Murray’s early inaccuracy saw it trail by three points at half time despite having two more scoring shots, with key forward Josh Schache (2.4) one of the biggest offenders in blustery conditions, despite leading well at the ball all match. Schache’s opponent Jack Firns was a defensive wall for Oakleigh along with Harvey Hooper and Lachlan Byrne-Jones, who repeatedly repelled Bushranger forward thrusts.

Two goals each to Chargers Tom Phillips (in the third quarter) and Lachlan Walker (in the final term) proved crucial in establishing breaks that Murray couldn’t overcome. While Lachlan Tiziani kept Oakleigh livewire Ben Crocker relatively quiet, the Chargers had too many avenues to goal and advanced to a preliminary final against the North Ballarat Rebels.