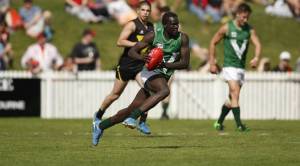 A host of talented young players from within Victoria’s community and state league competitions were given the chance to perform one final time in 2015 in the annual AFL Victoria Young Guns game.

While the scoreline saw the Green team defeating Black 17.11 (113) to 7.9 (51), the scoreboard was secondary to the player performances being showcased in the match as Michael Thompson reports.

Johns, a first year Coburg Lion, was influential in getting the Black team out to an 18 point lead early, gathering possessions at will and kicking a clever goal from a tight angle. Although prominent at half forward, Johns was then moved to the midfield as Green began to stamp their authority on the game. Teammate Ben Allan was also influential throughout the game.

As Green began to dominate around the clinches, Hayes appeared to be in a class of his own. The Bulldogs player was a clearance machine in the second and third quarters, and was able to push down into defence to impact a number of contests by courageously running back with the flight of the ball.

Lok was also prominent, playing in the midfield for three quarters. Early on, Lok was using his long penetrating kick to advantage, generating many scoring opportunities for Green. Playing predominately as a high half forward in the second quarter, Lok's defensive pressure was a highlight, allowing Porter to snap his third goal of the first half.

Porter was indeed the dominant big man in the first half, with his contested marking and ability to impact contests a highlight. Porter would consistently move up the ground to provide an option to assist the Green team. After the Green team elected to trial Lachlan Waddell as a key forward target for the majority of the second half, Porter would display his overall versatility by playing in the ruck and down back – where he was able to deny a near certain Cody Mance goal on the goal line.

Waddell would then continue the job Porter had started in the second half, playing a similar role. He was able to kick two goals in two minutes in the second quarter, and was also able to show his game sense by firstly taking some spectacular contested marks, before managing to find teammates in the clear for goals.

Ben Long (Northern Knights) was also a major contributor to the scoresheet for Green, kicking three goals, including some spectacular highlights for his first and second goals. He was able to shark a ball at pace for a brilliant goal in the first quarter, before opening up the second half with a brilliant spin move before scoring from a difficult angle. Long was able to provide x-factor, with plenty of fireworks every time he went near the ball.

For Black team, there were limited opportunities after quarter time. Maishman was perhaps Black's best, generating plenty of run with ball in hand. He was able to spend some time in the midfield, as well as at half back, where he was valiant against a sea of Green.

Rowan Marshall (North Ballarat) had a good battle in the ruck with Waddell in the first half, before later switching roles with Jordan Moncrieff, the son of Hawthorn forward Michael. Moncrieff was unable to truly kick into gear in this game, but was able to end the streak of 11 consecutive goals in the third quarter.