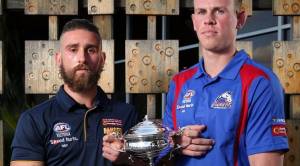 We take a closer look at the TAC Cup Grand Final match-up between the Oakleigh Chargers and Eastern Ranges at Etihad Stadium on Sunday.

These two teams have combined to win the last three TAC Cup premierships. Oakleigh claimed the flag in 2012 (by a golden point against the Gippsland Power) and in 2014 (by 47 points against the Calder Cannons), while Eastern took out the 2013 decider by 112 points over the Dandenong Stingrays. The Chargers were also runners-up in 2011 when they lost to the Sandringham Dragons by eight points, so the club is certainly no stranger to the biggest stage of the year.

Overall, Oakleigh has won three premierships in its 21-year existence (the first was in 2006) and produced Grand Final Best-on-Ground Medallists Jackson Macrae (2012) and Toby McLean (2014), who both graduated to AFL level. The Ranges have won two premierships in their 24-year existence (with the first in 2002), but have also been runners-up three times – in 1995, 2000 and 2004.

Round 11, Box Hill City Oval
Oakleigh 11.8 (74) d Eastern 9.13 (67)
Eastern’s second loss to Oakleigh in 2015 was nowhere near as comprehensive as the first. The Ranges were actually in front by five points at three-quarter time but gave up three goals to one in the final term. Dan Houston was a star in attack for the Chargers with five of his team’s 11 goals, while Jack Roughsedge was their best player with 26 disposals. Aaron Cotte’s hardness at the contest was important for Eastern (23 disposals, 11 tackles) and Darcy Crocker provided a spark with 27 disposals and two goals.

WHERE THE CHARGERS CAN WIN IT:

Oakleigh’s defence has been stellar in the finals, and so often a lethal source of attack. 170cm Lachlan Byrne-Jones would have to be one of the players of September so far, hard to miss with his mop of hair regularly dashing forward from half back (averaging five rebound-50s across the three matches). Byrne-Jones is often receiving the hand-off from the likes of Harvey Hooper, Sam McLarty and Daniel Beddison, who have all proven difficult for opposition teams to get past. Their ability to intercept Eastern’s forward forays in the air could be crucial to the outcome of this game as the Ranges aren’t overly tall inside 50.

If Eastern’s midfielders don’t lower their eyes and look to hit up livewire forwards such as Blake Hardwick, Darcy Crocker and Jayden Stephenson on the lead, the Chargers have the ability to cut off attacking forays at will. Oakleigh has their own mid-sized forward line that could be difficult for the Ranges to match up on, with the dangerous Pat Phillips (seven goals in the finals), Ben Crocker (six) and Tom Phillips (four) buzzing around inside 50.

To get the ball in there though, midfielders like Kade Answerth, David Cuningham and Lachlan Walker will need to keep the pressure on Eastern’s many potential match-winners in the middle, including Ryan Clarke, Bryce Batty and Jordan Gallucci.

WHERE THE RANGES CAN WIN IT:

The striking thing about Eastern’s run through the finals has been how its midfield simply keeps winning the ball and running it forward. Ryan Clarke has elevated himself in the eyes of many this September with his relentless running power. Alongside him, the Ranges midfield bats deep – Bryce Batty, Aaron Cotte and Dylan Clarke are just some of the engine room guns Oakleigh will need to watch out for, and so the question becomes whether the Chargers can keep them all under wraps.

Inside 50, Eastern’s electric forward line has the pace and smarts to trouble any defence if they receive good service from further up the ground. The league’s leading goalkicker Blake Hardwick seems to thrive on the big moments, Darcy Crocker has been dangerous all season and Jayden Stephenson and Callum Brown have burst onto the scene this September with bags of goals.

As with Oakleigh, another question is how the Ranges deal with a slightly unique opposition forward line. Ben Crocker has been the regular target for the Chargers as a mid-sized forward, but many of their midfielders can kick goals and talls Harry Thompson and Sam McLarty can float through the forward 50 too. The task will be on Eastern defenders such as Kane Keppell, Jack Maibaum and Haydn Stanley to remain flexible and be prepared for anything.