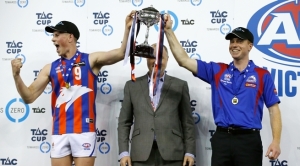 The Oakleigh Chargers couldn’t have timed their run to the TAC Cup premiership any better.

The former Carlton rookie has enjoyed a remarkable start to his TAC Cup coaching career, leading Oakleigh to back-to-back flags in his first two seasons in the role.

They then found another gear when it mattered, knocking off the Gippsland Power (7th at the end of the home-and-away season) by 78 points, Murray Bushrangers (3rd) by six points and North Ballarat Rebels (1st) by 32 points before Sunday’s 12-point triumph over the Eastern Ranges (5th).

“Last year, all the boys seemed to be on the same page throughout the season; it was just a very consistent and even group,” Stinear said.

“This year, we showed glimpses of what we can do but never really dominated a game until the elimination final (against Gippsland).

“I haven’t been in the caper too long, but from what I can understand, some years it comes together and in others you run out of time.”

Many of Oakleigh’s mid-season results were influenced by an abundance of team changes from week to week, due to certain players with Vic Metro representative duties and private school boys required to play in the Associated Public Schools competition.

The APS system is a unique obstacle for the club to work around (the Sandringham Dragons are also affected), but Stinear said the last two Chargers outfits had shown how to handle it – and subsequently made his own job easier.

“It very much goes onto the players,” he said.

“Because they play for several different teams, they could easily just turn up at Oakleigh and want to put on a show and get themselves drafted, but instead they make a choice to play team footy.

“If they’re genuine and they want to achieve something together, you go along for the ride with them; I guess I’ll be tested when I’ve got a group that doesn’t click and doesn’t want to buy in together.”

A testament to the club’s ability to have players buying in when it matters is the fact it has now won premierships three times after finishing the home-and-away season in sixth spot (2006 and 2012 were the other years).

And in this year’s Grand Final, the Chargers certainly bought into Stinear’s plan of denying the Ranges space to run and carry the ball forward at speed.

The plan worked brilliantly in the first half as Oakleigh established a 30-point lead at the main break, but Eastern snatched the momentum back in the third term to close to within two points at three-quarter time.

“We didn’t want the Ranges to have a spare number because they’re excellent at generating fast ball movement when they’ve got a spare player, so we tried to restrict that,” Stinear said.

“Our guys were able to shut them down for the majority of the game and still win their fair share of the footy, but there were certainly some worrying signs in the third quarter.

“(At the last change,) it was more just letting them know that it wasn’t going to come easy – I just said ‘You’re not going to get handed the victory – you’re going to have to work for it’ and I asked them to commit to each other for another 25 minutes.”

And sure enough, just as they’ve been forced to do several times throughout the season in the face of discontinuity at the selection table, the Oakleigh Chargers committed to the red and blue jumper once more.