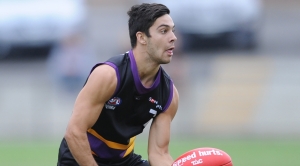 2013 Murray Bushrangers captain Michael Gibbons may have missed out at that year’s AFL Draft as an 18-year-old, but he’s made many sit up and take notice while playing for Williamstown in the VFL this season.

Gibbons, now 20, played one of the games of his life in the Seagulls’ 54-point VFL Grand Final triumph over the Box Hill Hawks, earning the Norm Goss Medal as the best player on the ground.

174cm Gibbons caught the eye as he regularly burst away from stoppages at pace, something his coach at the Bushrangers, Darren Ogier, witnessed first-hand a couple of years ago.

“He was a freak around the stoppages,” Ogier said.

“His clearance work was at an elite standard in the TAC Cup competition – he just gets to the right spot at the right time and is normally very clean with the footy.

Ogier said he was “really disappointed” Gibbons wasn’t given a shot by AFL clubs in that year’s draft.

“The way he came back from that and soldiered on to have a couple of really impressive seasons in the VFL and win the Norm Goss Medal was just a fantastic achievement,” Ogier said.

“He’s a great young fella and I certainly hope AFL clubs did sit up and take notice.

“The footy he showed me as an 18-year-old was as impressive as I’ve seen and I certainly can’t see any reason why he wouldn’t be able to acquit himself well at the next level.”

Gibbons paid tribute to the Murray staff for their holistic influence on his life during his time at the club.

“The two years I spent (at the Bushrangers) were awesome,” Gibbons said.

“Darren Ogier and (former Talent Manager) Andrew Carson were great to me and gave me every possible opportunity to get drafted, so I can’t thank those blokes enough.

See his Grand Final highlights below