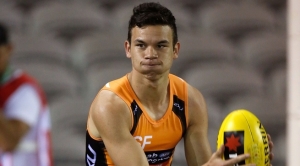 The 18-year-old small forward recorded the best time in the repeat sprint test (24.16s) and performed well in a range of other tests, including:

- A finish of equal-third in the 20m sprint with a time of 2.89s behind Oakleigh’s Alex Morgan and Dandenong’s Kurt Mutimer (2.88s);

- A finish of equal-fourth in the clean hands test with a score of 27 behind Dandenong’s Kieran Collins (29);

- A finish of equal-fifth in the relative vertical jump with a height of 69cm behind WA’s Jordan Snadden (75cm);

Rebels Talent Manager Phil Partington said Rioli’s explosiveness was already well documented, but that his performances in the endurance-based testing might have surprised those watching.

“Daniel’s performance at the Combine would’ve excited a lot of recruiters,” Partington said.

“They would’ve noticed he’s got outstanding speed and agility, but just seeing that endurance part of his athletic make-up would’ve enhanced his opportunity to be drafted by an AFL club.

“We knew Daniel had some endurance traits about him, but seeing it in games has been inconsistent – that’s something he still needs to work on.”

Rioli showed his promise in 2015 by representing his native Northern Territory in Division 2 of the U18 Championships and playing nine matches for North Ballarat, where he kicked 14 goals and averaged over four tackles per game playing mostly as a small forward.

Partington said Rioli moved into the Rebels midfield at times this season, and with his endurance running capacity, could potentially do so at the elite level if he added strength to his frame.

But the challenge for the talented youngster, whose father is the cousin of Hawthorn star Cyril Rioli, is seemingly the consistency of his effort.

“As a 16 and 17-year-old, he was indifferent in his efforts to attend training and his energy throughout training,” Partington said.

“He played some reasonable football late last year for the East Point Football Club... and we were willing enough to give him an invitation to do a pre-season at the Rebels.

“He didn’t get an invitation as a 17-year-old and didn’t play for his school’s first 18 at St Patrick’s College either, but once he was invited this year, he’s grasped the opportunity with both hands.”

Rioli has attended St Patrick’s College in Ballarat – winner of the last six Herald Sun Shields – for the last four years after coming to Victoria from NT club St Mary’s.

CLICK HERE to view all the top Combine results