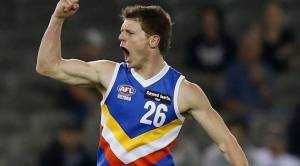 In the lead up to the 2015 NAB AFL Draft we will feature a number of stories on players in the draft mix this year and from the NAB AFL Combine.

Click on the headings below to view each story.

Jack Firns has taken on and matched it with some of the best key forwards in the TAC Cup this season. It was an impressive effort from the Oakleigh Chargers 18-year-old, given he managed only two TAC Cup games in 2014.

Josh Schache’s 2014 off-season has him primed to be taken with one of the first two picks at the upcoming AFL Draft. The 199cm Murray Bushrangers key forward kicked 27 goals in 15 TAC Cup matches last year, but realised he needed to work on elements of his game to reach a new level in 2015.

Melbourne’s outer northern suburbs are falling in love with football thanks to young talent like Hisham Kerbatieh. The Calder Cannons small forward grew up in the ethnically-diverse area of Meadow Heights next to Broadmeadows and played his junior football in nearby Hadfield.

AFL destination no drama for Hopper

It’s been difficult for Jacob Hopper to approach his football like most other AFL Draft prospects this year. The 18-year-old North Ballarat Rebel grew up in the NSW town of Leeton near Wagga Wagga and is zoned to the GWS Giants Academy. Despite missing large chunks of last season through knee and hand injuries, he’s played through 2015 with near certainty that he’ll be drafted.

The rise of Leonardis

Tyrone Leonardis has surprised even himself with how he’s burst onto the AFL Draft radar this year. The classy half back played eight TAC Cup matches in 2014 for Northern Knights as a 17-year-old and initially wasn’t expecting much more than to earn a few games for the Knights again in 2015. But that all changed very quickly.

The bond of Ben and Harry McKay

Ben and Harry McKay are hoping an interview at the recent NAB AFL Draft Combine is one of the last they’ll do together. The Gippsland Power key-position players, as twins, have naturally been seen as a package while playing in the same teams throughout their junior careers. But the 17-year-olds now feel it’s time to forge separate paths if they’re selected at the upcoming AFL Draft.

Callum Moore happily admits he’s jealous of some of his 2014 Calder Cannons teammates. The 19-year-old was part of a squad that featured no less than nine subsequent AFL draftees or rookies, with Moore breaking into the minor premiership-winning Calder team alongside most of them late in the TAC Cup season. After an important year of development in 2015, the 193cm mobile forward now wants what his former teammates have.

Balic on the right sporting path

Harley Balic has said his thanks to the game of basketball and now he’s moving on. The versatile Sandringham Dragons 18-year-old says his biggest footballing strengths – spatial awareness and athleticism – have transferred across from his time as a basketballer. But his first sporting love – which has taken a back seat to his football ambitions since early in 2014 – also left a physical legacy that returned to haunt him during the 2015 season.

Charlie Curnow dislocated his kneecap at one of the worst times of the football year. The Geelong Falcons 18-year-old was looking forward to possibly playing for Vic Country for the first time before his leg was wrenched in a tackle during the Round 8 TAC Cup match against the Eastern Ranges in mid-May.

Aidyn Johnson was scared – “very scared” – about the recent NAB AFL Draft Combine. The 17-year-old Bendigo Pioneers speedster played in just the first TAC Cup match for 2015 before sustaining a nasty long-term quad injury shortly after that kept him out of action for the remainder of the season.

Bailey Rice has made ‘that’ decision. The Dandenong Stingrays AFL Draft prospect had the unique choice of nominating between two clubs as his preferred destination under the father-son rule. Rice’s father Dean played 116 games for the Saints and 118 games for the Blues (including the 1995 premiership) from 1987 to 2001. But this week – despite being a Carlton supporter – Rice chose St Kilda as his first preference.

Oakleigh Chargers key defender Jack Firns barely made it to the starting line for the Chargers’ recent TAC Cup Grand Final triumph over the Eastern Ranges. Murray Bushrangers key forward Josh Schache was another to play during his team’s TAC Cup finals campaign in pain.

North Ballarat Rebel Daniel Rioli was named the 2XU Best Performer of the NAB AFL Draft Combine at Etihad Stadium. The 18-year-old small forward recorded the best time in the repeat sprint test (24.16s) and performed well in a range of other tests

A fly on the wall at Draft Combine

The NAB AFL Draft Combine is certainly a unique event to be a part of. For the 82 young men (including 46 TAC Cup players) whose physical and mental capabilities are analysed to the nth degree over four days at Etihad Stadium, it was surely one of the most testing and perhaps strangest experiences of their lives.

A number of TAC Cup players impressed in the early tests of the 2015 NAB AFL Combine. Friday night was the one and only time during the Combine that the footballs were in action, with the clean hands, goalkicking and kicking tests.