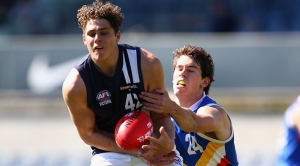 Charlie Curnow dislocated his kneecap at one of the worst times of the football year.

The Geelong Falcons 18-year-old was looking forward to possibly playing for Vic Country for the first time before his leg was wrenched in a tackle during the Round 8 TAC Cup match against the Eastern Ranges in mid-May.

The U18 Championships began the next week, with Country going on to claim the national title in an undefeated carnival.

While Curnow missed out on the achievement, he did return to action for Geelong three weeks out from the club’s finals campaign after it was initially feared the 191cm forward might miss the remainder of the season.

“When I did the kneecap it was pretty tough, but I worked my way through it,” Curnow said at the recent NAB AFL Draft Combine.

“Once we figured out what was actually wrong with my knee – there were a few ideas it could’ve been something different, like an ACL – I knew what I was doing and set a plan out.

“It was a bit rough – I hadn’t played Vic Country before, so I was hopefully going to get a game there, but... I guess that’s the way it works.”

Upon returning to the field in mid-August, Curnow promptly booted nine goals in the final three home-and-away rounds to help see the Falcons into the TAC Cup top four.

The Torquay junior starred by taking eight marks and kicking 4.5 against the North Ballarat Rebels in a qualifying final, but it wasn’t enough to secure victory and Geelong was bundled out of the finals at the hands of Eastern the following week.

Curnow said there’d be no ongoing effects from the injury and demonstrated how strong his legs were at the Draft Combine, winning the 3km time trial for tall forwards, defenders and ruckmen and reaching an impressive level of 14.5 in the beep test.

His endurance running ability is something he shares with his brother and current Carlton midfielder Ed Curnow.

However, 25-year-old Ed is 182cm tall – 9cm shorter than his younger brother – which makes Charlie an exciting prospect at November’s AFL Draft.

The younger Curnow could potentially be the next of the modern game’s tall, big-bodied star midfielders in the mould of Fremantle’s Nat Fyfe or Sydney’s Josh Kennedy, and did spend time in Geelong’s midfield this year.

But having looked dominant at times up forward in 10 matches for the Falcons, the question becomes: Where will Curnow fit in if he makes it to the elite level?

“It’s a big question that goes around a bit,” he said.

“I played a little bit of midfield and that was good fun – I got to learn off (Geelong teammates) Darcy Parish and Rhys Mathieson all year about midfield roles.

“I might see myself going through the midfield a bit later on in my career, but I’m not too sure... I even played back line for my bottom-age TAC Cup year.”

Curnow seems to be gifted with all the right tools to make an impact in the modern game, and if he needs any advice on what’s required to carve out a career in the AFL, he only needs to call on his older brother.

“Ed pretty much does his talking by his work ethic, but he always lets me know not to talk back to anyone, don’t talk too much and do what you need to do when you get to a club if that happens,” Curnow said.

Indeed, Charlie Curnow may soon be able to turn the tables on his brother in a much bigger setting than the backyard.