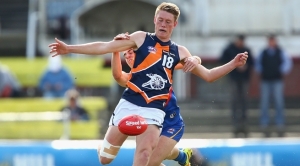 Callum Moore happily admits he’s jealous of some of his 2014 Calder Cannons teammates.

Moore broke into the minor premiership-winning Calder team alongside most of them late in the TAC Cup season, going on to play in each of the club’s finals, including the Grand Final loss to the Oakleigh Chargers.

After an important year of development in 2015, the 193cm mobile forward now wants what his former teammates have.

“It’s crazy, just knowing the fact I’ve played finals with Touk Miller and he’s played every game of football (for the Suns this year),” Moore said at the recent NAB AFL Draft Combine.

“I was speaking to Touk recently and he said the life he’s living is mint.

“It just makes you want to play football so badly, not only for the wealth and the popularity, but just for the love of the game and playing at the highest level you can play at.”

Moore came late to football from a basketball and rugby league background, and has a variety of exciting athletic traits that only started coming together consistently this season.

The Aberfeldie junior demonstrated his different types of explosiveness at the Combine, finishing in the top ten for both the standing and running absolute vertical jump, and finishing equal-seventh in the 20m sprint with a time of 2.91s – exceptional for a big man.

After missing the first five rounds of the TAC Cup season with a broken wrist sustained in a backyard kick-to-kick session, Moore played nine matches for Calder as a hard-working lead-up forward who took stints in the ruck, kicking 13.16 and averaging 10 hitouts per game.

He also booted 4.4 in four matches for Vic Metro at the U18 Championships, and while he admits his goalkicking still needs work, Moore said he was happy with his improvement in most areas in 2015.

“My leading and marking would be my strengths, and the long kick from outside 50,” he said.

“(I like watching) Nic Naitanui with that big leap and being able to take some pretty good hangers, and Nick Riewoldt being able to run his opponent around all the time and being that hit-up forward.

“I’ve always played forward, but they (the Calder coaches) chucked me in the midfield, playing a bit more ruck, to get the hands on the ball.”

While playing in the ruck provided a new challenge this year, so did Moore’s unofficial position as a leader within the Cannons playing group.

Having been invited back to the club as an overage player, he found he was looked up to by his younger teammates by default.

“It was pretty cool, getting all the young kids looking up to you,” Moore said.

“(That, and) just being a lot bigger than everyone else, I guess – kids seem to be getting a bit smaller. That was a bit of a confidence booster.”

2015 has indeed been a confidence-boosting year for this once-raw AFL prospect, a year that has brought Callum Moore closer to emulating the draft success of many of his former teammates.